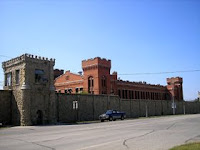 Sadly, we say goodbye to our friend Albert and once again make our way westward. Backtracking along U.S. 12, we make a side trip at Deer Lodge, Montana, the second oldest town in Montana. Today, this quaint little town boasts a population of about 3,500 and is best known for its Old Montana Prison Museum, which is actually a complex of museums which also include the Frontier Museum along with Desert John's Saloon Museum and the Powell County Museum, all of which transport the visitor back to the era of cowboys and the Old West. The Montana Auto Museum features over 120 vintage vehicles and Yesterday's Playthings is Montana's foremost doll and toy museum. Cottonwood City displays the Snowshoe Creek School and the Blood Cabin. It is this museum that draws us to Deer Lodge. 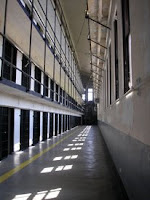 I am most interested in the Old Montana Prison which began operations on July 2, 1871. During its 100 year history, it held thousands of prisoners including at least one member of Butch Cassidy's "Wild Bunch." Over the years, the prison was expanded with the help of inmate labor, who built 1.2 million bricks and erected the 1896 cell house and several other buildings. A self-guided tour today leads visitors through the Cell House, Maximum Security, the “Hole,” and provide information and exhibits on original schedules, rules, prisoner artwork, and even moldering blankets on many of the iron cots in its prison cells. More lurid displays show a “Prison Life” photo exhibit, contraband items and homemade weapons; and guns, shackles and restraints utilized on the convicts. We also visited the other museums in the complex, but my morbid mind was most fascinated with the prison museum. 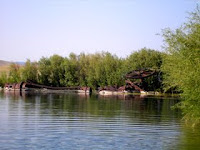 Then we’re back on U.S. 12 and looking for the Montana’s first gold discovery at Gold Creek in 1852. This little town provides a peek at just a couple of old buildings but appears to primarily be an agriculture town today. We wind through, looking for glimpses of its former mining days and find an old pond filled with mining equipment, but little in the way of ghost town type buildings. Was still a pretty drive, but we make our way back to the highway and head west again to the ghost town of Garnet, Montana. 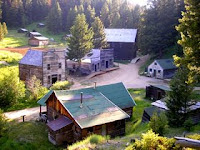 Garnet got its start in 1862 as a gold mining town and over the years the Nancy Hanks Mine produced some ten million dollars in gold ore. The rich veins of ore continued to produce off and on up until the 1950s, when the mines closed forever. 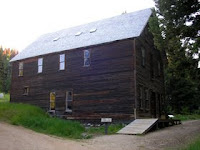 At an elevation of some 6,000 feet, Garnet today is one of Montana’s best preserved and least visited ghost towns. The townsite is managed by the Bureau of Land Management and the Garnet Preservation Association and is located on both public and private land. The old mining camp features some two dozen buildings including Kelly's Saloon, the Dahl Saloon, a blacksmith shop, a school, the jail, stores, numerous homes and miner’s cabins, and most impressively, the 1897 three-story J.B. Wells Hotel. An absolutely wonderful stop and you can be sure we will be digging up the history and writing all about Garnet in the near future.

We finally land in Missoula for the night, eagerly anticipating glimpses of Idaho tomorrow.
Posted by Unknown at 8:58 AM