What NOT to do while ghost towning on the Arizona Border 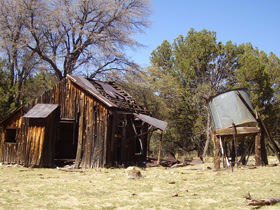 Ok, so I've been back from Arizona for a couple of weeks, madly writing up all the tales of our adventures and doing general catch-up. I send out this month's newletter, complete with an introduction that "carries on" about what NOT to do while ghost towning on the Arizona border. Now, I'm a seasoned traveler, having visited all but maybe 3-4 states in the U.S., and in a past lifetime, traveled full time nationwide for eight years. But, I guess, there's still a bit of the "small-town" girl still inside of me, 'cuz looking back, I sure did insist on making what could have been some bad mistakes.
So, I already told you a little about my bad planning for a ghost towning trip on what I've called the Patagonia Back Road - not buying gas and not eating in Nogales before we started, not bringing along enough water, etc. What I didn't tell you is that we actually traveled along the border for a couple of days and while we did, we saw at least one "flock" of illegal aliens quickly ducking down as we passed, as well as dozens of Border Patrol pick-ups, and full jugs of water sitting in the road. I'm so ill-informed, I don't even know what they are. Dave explains they are left for the illegals because so many have died of thirst in the desert after their clandestine border crossings.
Oh, ok. Now that doesn't make me a small town girl - just grossly ignorant! The "small-town" girl mentality only begins to materialize on the second day.
As we're bumping along these backroads, I do begin to wonder why we're not seeing anyone else, other than a couple of Forest Rangers and dozens of Border Patrol trucks. Hmm, why is that? My experience tells me on previous backroading trips in Colorado, New Mexico, and even northern Arizona, that I'm not the only curious ghost towner wanting to explore these remote places. But, it's a fleeting thought, and we move on. 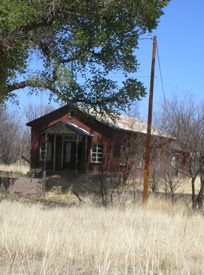 Of course, we're driving an SUV and inevitably get stopped by the Border Patrol. People might be hiding behind our seats, I'm thinking, and they're just doing their jobs by checking. Well, there's more -- seems as if this is a high traffic drug running area and they just aren't used to seeing "tourists," as most are wise enough to not venture in. Oh. Now, that also makes sense, but never crossed "small town girl's" brain. But, by this time, we're halfway through the 50 mile trip (that ends up taking us six hours,) so turning around seems senseless. We carry on, to finally arrive in Bisbee, dying of thirst, hungry, and short-tempered. Still, I'm chalking the whole thing up as an adventure, until I share the trip with my newsletter readers.
Ohmagosh, then I really get an eye opener!!! Many of those folks are from Arizona or have traveled it extensively. Did I not think that just maybe someone might have stolen our car? -- stranding us out there in the middle of nowhere, of course without food and water, cuz we didn't bring any. Did I not think about how we may have been killed by "stumbling" into some kind of major drug deal? Do I know about the Arizona Border Vigilantes and the all-out wars between them and the illegals?

Oh. Small town girl! Ignorant girl!
Now, I still don't believe for a minute, that everywhere nor everyone down there is dangerous. But, it's certainly unwise to take the trip as ill-prepared as we were.
You might want to think of skipping this one -- look at our pictures instead.
Posted by Unknown at 6:25 AM No comments: