Most Haunted of the American West

Here's a few of the cities that made the list:

A couple of places that are said to be very haunted include:

Afer having lived in the limelight with attention from the press and fans, some of our nation's famous and infamous celebrities are seemingly just not ready to move on. So, if you never had the opportunity to meet them in real life, according to these tales you might still be able to catch a glimpse of them as they continue to haunt the places of their pasts.

Lots of these ghostly apparitions are of the Hollywood variety such as Marilyn Monroe who is said to haunt her former home, as well as the Hollywood Roosevelt Hotel; Harry Houdini, the magician and escape artist who allegedly didn't even believe in ghosts; and Lon Chaney, the ever popular star of silent movie horror films.

Political ghosts also lurk around the country, the most prevalent of which is Abraham Lincoln, who not only continues to roam around the White House, but also his tomb and former home in Springfield, Illinois. Then there's Aaron Burr, the third Vice President under Thomas Jefferson, who's not known so much known for that is he is for killing Alexander Hamilton in a duel. Today, Burr is said to haunt the One If By Land, Two If By Sea Restaurant, in New York City. Speaking of Thomas Jefferson, he too is said to haunt the white house, playing the violin in the Oval Office.

Even our infamous Old West outlaws get into the picture as Jesse James is said to haunt his old farm in Kearney, Missouri and train robber Black Jack Ketchum continues to lurk within a cave in New Mexico.

If you want a good spook story for Halloween -- you'll find dozens of them on Legends of America's Ghostly Legends pages.

In the meantime, have a Happy Halloween!!
Posted by Unknown at 11:29 AM No comments:

For those with precious little to do, why not take a wee peek at a few of the curious and entertaining place names found in the United States of America (like Zap, North Dakota and Knockemstiff, Ohio). So says Victoria Elizabeth, author of What's In a Name? - Odd Places in America.

Elizabeth continues by begging to ask these questions:

Elizabeth's article continues with some very odd city names for every state in the country.

As we began to received emails asking why other interesting names aren't included, we created an online submission form where our reader's can add to Elizabeth's list. After we got this submission, I couldn't help but do just a little research.

Wow, now that's a mouthful! The lake is most often referred to by locals as "Webster Lake," as the actual pronunciation is too difficult. Given the name by the Nipmuk Indians, the name loosely translates to "fishing place at the boundary." Long ago it was considered neutral territory and became a meeting place and powwow site among the Nipmuks and the Narraganssett, Pequot and Mohegan tribes. However, when the Webster Times ran a humorous article about the lake with a tongue-in-cheek translation of, "You Fish on Your Side, I Fish on My Side, Nobody Fish in the Middle," it became so popular that many don't know today what the actual translation is. "Chargoggagoggmanchauggagoggchaubunagungamaugg" is the longest place name in the United States and 6th longest in the world. See more about the lake and its history at History of the Lake.

Add your own odd place names by visiting HERE!
Posted by Unknown at 11:23 AM 1 comment: 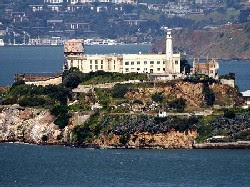 What an absolutely fascinating story! Are you like me and thought that Alcatraz was merely an infamous prison that housed America's worst? After getting a lead that the island was haunted, I decided to research this place, and ohmagosh -- not only is this the a tale of a prison and its ghosts, but Alcatraz has a much longer history beyond its prison days. Serving as a military outpost for some 80 years before it housed the notorious prison, this is the stuff of cowboys and indians, the mounted cavalry, Civil War, and more!!

If you too, hold a fascination with Alcatraz and decide to pay a visit, make sure you book your reservations well in advance for the tours as they often book up days in advance.

For the full article on Alcatraz, visit The History & Hauntings of Alcatraz on our website.

Sitting in a hotel room resting after having spent the day at the Springfield, Illinois Route 66 festival and car show. My first trip to this annual event, it appears the focus is more on the car show than Route 66. Although they had some great bands, beautiful cars, and lots of friendly people, I was disappointed that it wasn't very "Route 66" focused. The Illinois associations were there but no one else. Very few Route 66 vendors. I know I was comparing to the Tulsa festival last summer, which led to my disappointment. I also know that there was a huge festival in San Bernardino just a few weeks ago that kept alot of people from attending Springfield. I'm just wondering if this was a "fluke" year at Springfield, or it's generally always that way.

Don't get me wrong, I still had a great time and met alot of wonderful people! And, along the way, I got some great photographs of Illinois and visited one of Illinois' most haunted cities - Alton. Stay tuned for that story!
Posted by Unknown at 7:00 AM 3 comments: