A Very Large Steak on Your Route 66 Journey 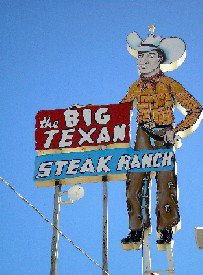 While not technically on Route 66 today, the original Big Texan Steak Ranch first stood on Route 66 along East Amarillo Boulevard when the steakhouse was built in 1960. It all began in 1959, when Bob Lee went seeking a large steak in the midst of “cow country.” To his surprise, Amarillo sported not a single cowboy steak house, which Lee soon began to rectify.

A year later, The Big Texan Steak Ranch opened, claiming to serve the largest steak in Texas. But simply serving the largest steak wasn’t enough, Lee soon began promoting a Free 72 ounce Steak Dinner if customers could eat the whole thing in less than an hour. It wasn’t long before the promotion gained national attention and travelers thinking of Amarillo, immediately associated it with the Big Texan Steak Ranch, making the restaurant a “must stop” for travelers of the Mother Road.

When I-40 barreled through Amarillo, bypassing Route 66, Lee moved the restaurant nearer the traffic, but the famous steakhouse retained its reputation as a Mother Road landmark. In addition to its more than 40 year old steak promotion and seating for 450 in its restaurant, the Big Texan also sports a motel, Old West entertainment, a gift shop, and even a Horse Hotel, all decorated to resemble an Old West town. The Lee family continues to operate the complex that is not only lots of fun, but also provides a delicious steak.

For those with a very large appetite the Big Texan is a "must stop" on your Route 66 journey through the Texas Panhandle.
Posted by Unknown at 4:47 AM 1 comment: