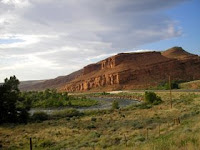 Ok! Yes, this day is what I’m talking about. Determined to have a great day, I awoke chipper and excited to put yesterday behind us and get after seeing some of the great state of Wyoming. We’re headed for a couple of Freemont County ghost towns -- Atlantic City and South Pass City, mining towns near the Oregon Trail.

The morning is absolutely gorgeous, and we follow along the Wind River by towering orange bluffs and lush green valleys to our first stop of Fort Washakie. Like ghost towns, I can’t pass these historic forts, without taking a look. F 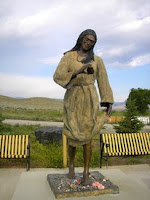 irst known as Camp Brown, the fort was built in 1869 as a sub-post to Fort Bridger on the newly created Shoshone Indian Reservation. In 1878, it was renamed to Fort Washakie in honor of the last chief of the Eastern Shoshone tribe, Chief Washakie. It served as a military post from 1869 to 1909. In 1913, it was transferred to the Shoshone Indian Agency and today serves as the headquarters for the Eastern Shoshone tribe. A number of the old fort buildings continue to be used today for various Shoshone administrative purposes. While there, I took lots of pics of the historic buildings and we visited Chief Washakie’s grave in the Washakie Cemetery, as well as Sacagawea's grave at the cemetery named for her. Sacagawea was a young Shoshone Indian woman who was instrumental in aiding Lewis and Clark in their journey. 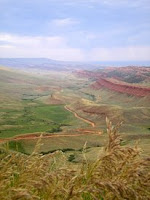 Then, we’re off to Lander, with breakfast on our minds, but make a quick detour at the Museum of the American West. Though it is too early to be open, the museum features several historic buildings in its Pioneer Village that we are able to view, including several cabins, a barn, a retail establishment, a school and more.

Beyond Lander we’re on our main mission to the historic mining of South Pass, Wyoming. Along the way, we see stunning views of Red Canyon before making our way to Atlantic City. This was once a mining camp that got its start following the 1867 gold rush in present-day Freemont County, Wyoming. The town began to d 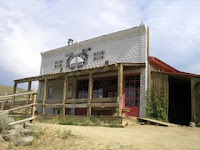 ie when the gold was played out, but today is reborn with some 57 full-time residents. It’s dusty streets feature a more than two dozen historic buildings including the 1893 Giessler Store, which now serves as very cool saloon; the 1911 St. Andrew’s Episcopal Church, the bells of which were ringing during our visit, calling its congregation for services; the century old Carpenter hotel, which today serve’s as the Miner’s Delight Bed & Breakfast, and many more. A wonderful stop.

Then we’re on our way to South Pass City, just a few more miles down the road when we spy a large mine perched atop the hill. Hmm – is there any way to get closer. We’re looking for a road and are ecstatic to find one a mile or so down the way, take the detour and yes! – it leads us directly to the mine. Another great stop, the historic location features not only the mine itself, but several outbuildings. 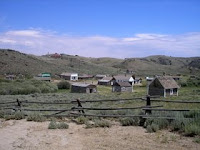 South Pass City is today a State Historic Site, which features more than 20 restored original buildings. The city got its start as a stage stop along the Oregon Trail during the 1850s, but boomed when gold was discovered in 1866. Growing to a population of some 2,000 just a few years later, the town sported numerous buildings and businesses. Like other mining towns, it dramatically declined as the gold played out and its buildings began to fall into disrepair. By the 1950’s, it was a complete ghost town, and for the next two decades became a privately run tourist attraction. By 1975 it was owned by the State of Wyoming and soon became a state historic site. 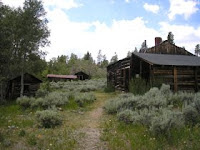 While in South Pass City, I purchase a Wyoming Ghost Town book, and discover we have missed a site along the way – the un-restored camp of Miners Delight, just a few miles from Atlantic City, so we backtrack a little. Located on BLM land, the camp was also known as Hamilton City. The site requires a short hike back in the woods to about a dozen tumbling buildings which have not been restored, but have been saved from crumbling into complete ruins with supports. 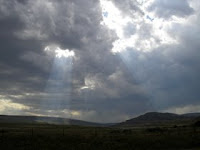 Backtracking to Lander, we’re now on our way north again, with the final objective of landing in Cody, Wyoming. We’re once again viewing some great scenes along the Wind River, then through Thermopolis, which features the Hot Springs State Park and the largest Mineral Hot Springs. While we really wanted to make a stop at the Hot Springs, we’re really trying to make up some time after United Airlines stole a day of our vacation, so we blow past making our way to Cody. For a change, we get a great room at the Holiday Inn – expensive as all get-out, but by this time, we don’t even care. Tomorrow, a tour of Cody’s Old West and on to Yellowstone.
Posted by Unknown at 6:15 AM