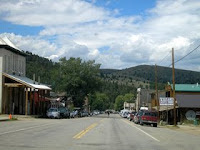 Now, how could I be more excited about this day than yesterday? Because it’s ghost town day, and some of these I have been looking forward to seeing for years. We head westward through Bozeman along the Bozeman Trail, where we can actually see remnants of the historic path and see the few remaining buildings of the mining and stage station town of Red Bluff. We then begin to cut southwest on our way to Virginia City. 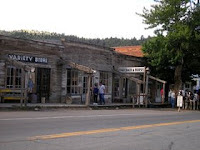 Though by definition a ghost town, Virginia City is very much alive. Frozen in time this early settlement provides one of the best-preserved examples of the many mining camps of the American West. Gold was discovered in Alder Gulch in 1863 and within a year, some 10,000 miners had made there way to the area, lining the hills with tents first before beginning to build permanent buildings. In 1864 Congress created the new territory of Montana, separating it from Idaho Territory. By the following year Virginia City had gained so much influence that the capitol was moved from Bannack, to become the territory capitol. Virginia City and nearby Nevada City became known as the site of the richest placer gold strike in the Rocky Mountains. In the first three years alone, an estimated $30 million worth of gold was removed from the gulch. Today, Virginia City is a National Historic Landmark District, which features more than 200 historic buildings from its prosperous mining days. 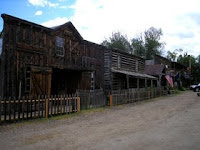 Next we travel the few miles to Nevada City, whose history is much the same as its nearby neighbor, Virginia City, though it was never as large. Today, the site features not only original buildings from the mining camp, but also historic buildings that have been moved in from the surrounding area.

Then we’re headed southwest once again and choose to take a dirt road shortcut and got a bonus when we stumble across an old community called Silver Spring that we didn’t know existed. Though only two buildings remain, it was a cool stop. Then we’re headed to Bannack, but “Tommy” (our TomTom GPS) gets us lost – well not lost, but takes us down more bumpy dirt roads instead of directing us back to a highway. We finally emerge at Dillon, Montana and make our way to the ghost town and once thriving mining camp of Bannack. 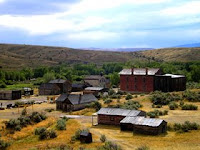 Gold was first discoverecd here in 1862 and by the following year was filled with some 3,000 miners. It was in Bannack, that Sheriff Henry Plummer was said to have led a gang of road agents that terrorized the region. He was hanged by vigilantes in 1864. Today, Bannack is a Montana State Park, which features over 60 original structures. The town is preserved, rather than restored, and visitors are allowed to enter the buildings. This is a great opportunity to get a real feel of the Old West.

Taking the Pioneer Mountains Scenic Byway north from Bannack, we our surprised to find that there is another ghost town along the way. Though the day is getting a bit late, I just can’t bypass a ghost town opportunity, even though it winds up being just a little bit of an ordeal. While in Bannack, the sky decided to open itself upon the world, drenching the region and generating some fairly large wind gusts. We weathered out the storm inside the old Meade Hotel. 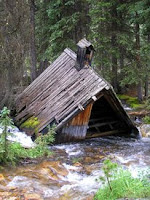 In any event, the storm took more of a toll along the byway, as we pass a number of downed trees, and as we take the four-mile detour off to the mining town of Coolidge. We find we have to hike the last ½ mile in, which feels more like at least a mile. But it was well worth the trip, even though our shoes are soaking wet and hordes of large misquotoes have made dinner of us. The site, which once featured the large Elkhorn Mine across the stream was a significant company town. Today, numerous structures continue to stand, but the vast majority have fallent and are slowly being reclaimed by nature. Unfortunately, the mine and mill across the river are not accessible, the road blocked by a gate and a “do not enter” sign.