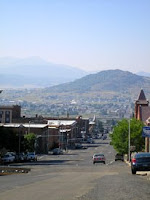 We’re off to Marysville via a round-about way westward from Butte taking the Pintler Scenic Route north, which features not only beautiful scenery, but yes, you guessed it -- a couple of ghost towns -- then hitting Highway 12 eastward to a cut-off just before Helena, to make our way to the old mining camp of Marysville, and our final destination of a remote cabin in the wildnerness that belongs to our “old/new” friend Albert Hall.

Butte got its start in the late 1800s when gold and silver were mined in the area. But, its most prominent ore was copper and when electricity began to be used in abundance, there was a soaring demand for the red ore. The town soon began to mine copper almost exclusively and by the turn of the century the town was buzzing with miners and large mines. When World War I began, the demand for the precious metal soared and the small town became one of the most prosperous cities in the country, often referred to as “the Richest Hill on Earth.” During this time, more than 14,000 miners were working on the hill, and down below the town was prospering with numerous saloons, brothels, and every other imaginable business to support the many men and their families. 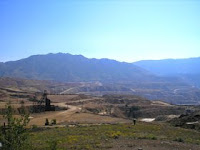 Butte's happy heydays were interuppted however, when, on June 8, 1917, a large fire was sparked some 2,000 feet below ground, which spewed flames, smoke and poison gas throughout the underground tunnels. Though immediate rescue attempts were made, 168 men lost their lives. The Granite Mountain Mine disaster is the worst hard-rock, metal mining disaster in U.S. history. The mining boom continued in Butte up to the 1950s when the ore began to decline, putting the many mines out of business. Today, these many relics of more prosperous times sit silent atop Granite Hill. 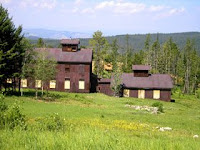 We pass by a few more mining remains as we travel westward on Highway 1 and turn northward to the Pintler Scenic Route. We pass by Georgetown Lake and begin to look for the road that takes us to the old mining camps of Georgetown and Southern Cross. Alas, Georgetown is right below a ski resort and virtually all signs of any mining activites or historic views have been replaced by new cabins, fully restored old buildings, and new condos – progress! That’s ok, cuz we continue to make our way along the road and are rewarded with several remnants in what was once Southern Cross. There appears to be a large boarding house or hotel, along with a mine building and a few scattered cabins. However, the area is buzzing with bulldozers and other equipment that show strong signs of more development for the nearby ski resort and lake. Could be these building are in for a short life span. 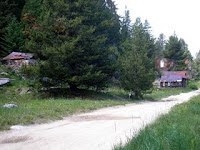 Backing out, we continue along the scenic route passing by a number of picturesque homesteads and barns before nearing the quaint little town of Phillipsburg and the turnoff to the ghost town of Granite. Driving along a rugged road upwards we come to the townsite and though I am surprised that it doesn’t have more remains than it does, as the town was quite large at one time, there are still lots of photo opportunties.

Back-tracking once again, we head north, before turning onto Highway 12 east towards Marysville, where we are meeting Albert at 4:00. Arghhhhhhhhh!! We come upon highway construction and it’s bad. We are forced to travel 20 miles behind a pace car whose spedometer never climbs higher than 30 miles per hour. This continues through several small towns and I am fussing loudly. Where we come from, road construction is done in smaller chunks, stopping and starting before and after small towns. Oh, we are going to be so late!!! Frantically, we try to call Albert – no phone reception. Double Arghhhhhh! Well, we can only hope that our “old” friend who we’ve “met” through the website, but have never “met” in person, won’t become disillusioned and leave. An hour late, we finally arrive in Marysville and lo and behold he’s still there. 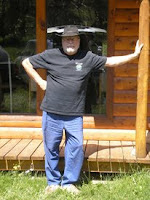 Albert has been a long time reader of our newsletter and last year graciously invited us for a visit if we were ever in his direction. When the Montana trip planning began this year, I contacted Albert, and yup, his offer still stands. His quaint and fully modern cabin sits some six miles southwest of Marysville in a quiet little meadow, surrounded by mountains and filled with wildlife. It is great to finally put a face with a name as we meet Albert at the Marysville House and after enjoying a beer, we follow him up a rugged road that crosses the continental divide and twists and turns within a mass of trees as we slowly make our way deep into the Helena National Forest. His beautiful little cabin (the only one we’ve seen for miles) finally comes into view and we step out to take a look at this pristine abode in the wilderness. No old miners shack here, but a modern, fully equipped cabin that inegeniously uses the resources of the surrounding land to provide electricity and water. AND – he has sattelite internet! 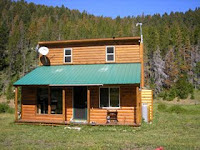 Albert says the folks “in town” call him a hermit, and the remoteness of this place would seem to make it so, but, though he loves his solitude and peaceful surroundings, he’s not a “hermit” in any sense of the “generic description” in my mind. He’s smart, well-educated, witty, articulate, social, and one of the best hosts we’ve ever experienced. (I love my job! -- We meet the greatest folks!) He entertains us with tales of his life before retirement as a California detective, an art teacher, and a walk-on extra in several movies. After retirement, he then traveled the nation in an RV for a couple of years, looking for that perfect place to spend the rest of his life. In the meantime, he’s barbequing us an absolutely perfect steak, opening his well-stocked liquor cabinet, regaling us with regional tales and promising to play “personal guide” for tomorrow.

I have had the opportunity to spend quality time with Albert at his cabin, too. Wonderful host, wonderful stories, wonderful place! I met him at a writers confrence in Butte, MT a few years ago and have been friends ever since. I just visited him this past weekend, and since I share a joy and facination with history and ghost towns, he showed me your blog, and now you have a new reader!
Michele
(Helena & Great Falls, MT )