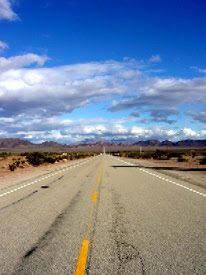 California's ribbon of the Mother Road stretches from the Colorado River near Needles, all the way to the Pacific Ocean at Santa Monica. Traveling through deserts, mountains, ghost towns, metropolitan areas, and
beach communities, California's 320 miles of the Mother Road provide a wide variety of geography, cultures, architecture, and photographic opportunities.

Like other states, many of the vintage icons along the old Mother Road have been obliterated in California, by the bustling population's desire to build "new and shiny," especially in the cities, where you will need to search a little
harder to find the Route 66 era views. Put on your "patience” hat as you head into the second largest city in the United States and give yourself plenty of time, but persevere, as the historic views are well worth it.

You will begin your trek across California at Needles, which provides a peek of several vintage motels before you move into the Mojave Desert and the lonely ghost towns of Goff, Essex, Chambless, Amboy and Ludlow before rejoining I-40.

Take a side trip to the historic ghost town of Calico on your way into Barstow. In Barstow, you can still see many vintage icons, including the El Rancho motel which was constructed from railroad ties, and the restored
Harvey House Hotel and depot which houses the Route 66 Museum.

On your way to Victorville, take a peek at the Exotic World Museum, a tribute to burlesque, at nearby Helendale,
and another Route 66 Museum once you enter Victorville. As you continue your journey into the San Bernardino Valley, you will quickly know that you are entering the sprawling Los Angeles proper; however, San Bernardino provides a view of several vintage businesses as well as the world's first McDonalds, which is now a museum. And, don't miss the infamous Wigwam Motel on the border between San Bernardino and its suburb Rialto, that once rented its rooms by the hour with its sign displaying "Do It In a Teepee."

Continuing on through Fontana to Rancho Cucamonga, don't miss the old 1920s gas station, and the Route 66 Visitors Center and Museum. As you pass through Upland, grab a buffalo burger at the landmark Buffalo Inn, before
making your way on to Pasadena.

From here the original road survives for 80 miles through Los Angeles and its suburbs, where it is known variously as Foothill Boulevard, Colorado Boulevard, Huntington Drive, Sunset Boulevard, and Santa Monica Boulevard until you reach the western end of the Mother Road at the Santa Monica Pier.

Check out the historic 1913 Colorado Street Bridge in Pasadena, continue to downtown Los Angeles, where you can see dozens of historic buildings, and move on through Hollywood and Beverly Hills for a peek at the "stars" before finally reaching your Santa Monica.

FYI, Exotic World is no longer in CA; it's in Las Vegas now...

Like you, I'm intrigued by Route 66 and have included on my site the Wigwam Motel and the California Route 66 Museum as a couple of the California tourist attractions that I think people should check out when they visit that part of the state.

I really enjoy your site. Keep up the good work!