*Editor's Note: We made this trip in 2007. Things have changed somewhat along the Mexico Border and we were pretty naive at the time in making this jaunt.  We would not recommend it today. 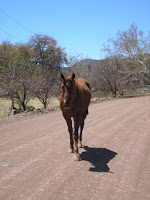 On a ghost town mission, we head up state highway 82 to the small town of Patagonia, having made the mistake of not eating breakfast, getting something to drink, or filling up with gas in Nogales. Not sure why I thought Patagonia might be bigger than it was, but we were in for a rude awakening. Cute little town, but not much there. We paid an exorbitant amount for gas at the one tiny full-service gas station and ate packaged tuna salad sandwiches from the small market. We grabbed one bottle of water each and headed down dusty Harshaw Road in search of off the beaten path ghost towns of Harshaw, Mowry, Washington Camp, Duquesne, and Lochiel. This path, though dirt, was a good road dotted with ranches on either side. Our first stop, slowing down for a beautiful horse on the road. Now, for whatever reason, animals just seem to come to me, even though I'm not a big animal lover. We stop, the horse turns and heads straight for the car. Dave laughs, he's seen this happen dozens of times. 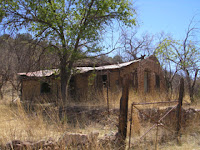 Onward to Harshaw, we find little left of this old settlement that once boasted some 2000 souls. For a brief period, the town was rich in silver, reportedly producing more than $350,000 in a four month period in 1880. Alas, like other mining towns, it quickly played out. Today, there are just a couple of buildings and a neat little cemetery up the hill. Of the little mining camp of Mowry, some five miles further down the road, we found no remains except for a low foundation. 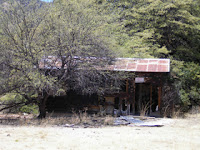 Another four miles south is the old site of Washington Camp that was first prospected in the early 1860's but quickly abandoned due to numerous Apache attacks. However in the 1880s in began to boom when the Duquesne Mining and Reduction Company of Pittsburgh purchased the claims and began operations at what became Duquesne. Once having some 1000 residents, little is left of Washington Camp's old buildings today, though the area is dotted with mining remnants and newer residents.

Continuing on to Lochiel, this old settlement, lying right on the Mexico border, remained a crossing point into Mexico until the early 1980s, when it was closed for budgetary reasons. First established in the early 1880s, it prospered with two smelters for neighboring mines. Today, it is privately owned by ranchers and cannot be accessed, though photos can be taken from the road.

Continuing on this dusty trail, the road remains good but we have now both finished our one bottle of water and the dust kicking up is making us thirsty. It's another 20 miles down this winding path before we reach the next stop - the ghost town of Sunnyside. We're watching along the road as the U.S./Mexico border fence looms in the distance, and it comes as no surprise that we run into several border patrol officials, getting stopped by one to make sure we are "legal." 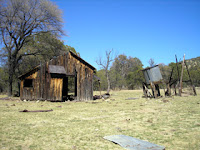 We finally reach the Sunnyside Road, which deteriorates badly. For three miles we bump and jostle, wondering if this destination is worth the trip. Most definitely, it requires a high clearance vehicle. We finally reach a point that we don't even think should be driven and decide to hike for a short period. About 1/2 mile down the road, we are rewarded with the crumbling little camp of Sunnyside. This old settlement was unusual among Arizona ghost towns, as it had no saloons or brothels, rather it was a religious community. Though families lived in separate quarters they had their meals in a communal building and worked as a group in the mine, at agriculture, in the sawmill, or other community tasks.

Today, this old place provides a number of picturesque opportunities but is a difficult trek to get to. By the time we finally returned to the rocky and treacherous road, backtracking out of there, we were, of course, extremely thirsty, not in good humor, and were of the opinion that the trip was not worth it.

But, still, we had quite a little trip ahead of us to reach to Coronado National Monument. After miles of more dust and a climbing winding road, we were never so glad to reach the Visitor's Center, that thank goodness, had bottled water for sale. The park commemorate the explorations of Francisco Vasquez de Coronado. A few more miles brings us to a much anticipated paved highway and we are on our way to Bisbee. 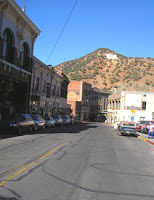 This picturesque 1880's mining city proved to be one of the richest in the world, producing nearly three million ounces of gold and more than eight billion pounds of copper, not to mention the silver, lead and zinc that came from these rich Mule Mountains. By the early 1900s, the Bisbee community was the largest city between St. Louis and San Francisco. 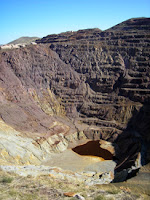 It had a population of 20,000 people and had become the most cultured city in the Southwest. Mining continued in the community until 1975 and though the town's population was dramatically reduced, it hanged on to its Chochise County seat status. Its historic buildings languished for more than a decade until retirees and artists began flood into the community, reviving it into an artist's colony and shopping mecca. Today, many of its historic buildings have been restored and on the day that we were there, it was so congested with people, and we were so tired from the long dusty trail, that we unfortunately didn't appreciate it like we should have. However, we did stop to take a few pictures, especially of the large Lavender Pit, the open pit copper mine, which continues to dramatically display Bisbee's prosperous mining days.

Done, we headed to Sierra Vista and our much needed hotel and a good restaurant.
Posted by Unknown at 8:37 AM